Today’s blog gives you some tips on nutrition. I read the info recently on one of my favorite sites (Eat This, Not That) and thought I’d pass it along! The tips are simple, sensible and manageable for all of us. Exercise your nutrition muscles today and enjoy!

Yes, mornings are crazy. But they’re also our best hope at regaining our nutritional sanity. A 2005 study synthesized the results of 47 other studies that examined the impact of starting the day with a healthy breakfast. Here’s what they found:

People who skip breakfast are more likely to take up smoking or drinking, less likely to exercise, and more likely to follow fad diets or express concerns about body weight. Common reasons cited for skipping were lack of time, lack of hunger, or dieting.

Bad news. Sure, it would seem to make sense that skipping breakfast means eating fewer calories, which means weighing less. But it doesn’t work that way. Consider:

People who eat breakfast tend to have higher total calorie intakes throughout the day, but they also get significantly more fiber, calcium, and other micronutrients than skippers do. Breakfast eaters also tended to consume less soda and French fries and more fruits, vegetables, and milk.

There’s a big difference between mindless munching and strategic snacking. Snacking with purpose means reinforcing good habits, keeping your metabolic rate high, and filling the gaps between meals with the nutrients your child’s body craves.

Snack portions aren’t the only things that have increased wildly in size. Since 1977, hamburgers have increased by 97 calories, French fries by 68 calories, and Mexican foods by 133 calories, according to analysis of the Nationwide Food Consumption Survey.

A study published in the American Journal of Preventive Medicine looked at 63,380 individuals’ drinking habits over a span of 19 years. The results show that for children ages 2 to 18, portions of sweetened beverages increased from 13.1 ounces in 1977 to 18.9 ounces in 1996.

One easy way to short-circuit this growing trend? Buy smaller bowls and cups. A recent study at the Children’s Nutrition Research Center in Houston, Texas, shows that 5- and 6-year-old children will consume a third more calories when presented with a larger portion. The findings are based on a sample of 53 children who were served either 1- or 2-cup portions of macaroni and cheese.

Too many of us keep in mind the adage “watch what you eat,” and we forget another serious threat to our health: We don’t watch what we drink. In fact, according to research from the University of North Carolina, Americans now slurp up nearly 25 percent of their calories in liquid form—nearly double the rate we used to drink just 20 years ago. One study found that sweetened beverages constituted more than half (51 percent) of all beverages consumed by fourth- through sixth-grade students. The students who consumed the most sweetened beverages took in approximately 330 extra calories per day, and on average they ate less than half the amount of real fruit than did their peers who drank unsweetened or lightly sweetened beverages.

One important strategy is to keep cold, filtered water in a pitcher in the fridge. You might even want to keep some cut-up limes, oranges, or lemons nearby for kids to flavor their own water with. A UK study showed that in classrooms with limited access to water, only 29 percent of students met their daily needs; free access to water led to higher intake.

Another important strategy: Be extra careful about the juice you purchase. Too many “juices” are little more than sugar water masquerading as the real thing. Ocean Spray Cran-Raspberry, for instance, has just 15 percent real fruit juice. The other 85 percent? High-fructose corn syrup and water. Make sure the juice you buy says “100 percent Fruit Juice” on the label, and try to choose one made from a single fruit, not a mix of high-sugar fruits like white grapes, which are commonly used in fruit juice blends.

Here’s a rule of healthy eating that will serve you well when picking out foods for your family: The shorter the ingredients list, the healthier the food. (One of the worst foods we’ve ever found, the Baskin-Robbins Heath Shake, has 73 ingredients—and, by the way, a whopping 2,310 calories and more than 3 days’ worth of saturated fat! What happened to the idea that a milk shake was, um, milk and ice cream? Let’s be grateful that Baskin-Robbins finally pulled this monstrosity from their menus.) The FDA maintains a list of more than 3,000 ingredients that are considered safe to eat, but we’ve found reasons for concern for a number of the additives on that long list, and any one of them could wind up in your next box of mac ’n’ cheese.

According to USDA reports, most of the sodium in the American diet comes from packaged and processed foods. Naturally occurring salt accounts for only 12 percent of total intake, while 77 percent is added by food manufacturers.

Children in families with more structured mealtimes exhibit healthier eating habits. Among middle- and high-school girls, those whose families ate together only once or twice per week were more than twice as likely to exhibit weight control issues, compared with those who ate together three or four times per week.

Of course, the notion of a 6 p.m. dinnertime and then everyone into their pj’s is a quaint one, but it’s hardly realistic in a society where our kids have such highly scheduled social lives that the delineation between “parent” and “chauffeur” is sometimes difficult to parse. While we can’t always bring the family together like Ozzie Nelson’s (or, heck, even like Ozzy Osbourne’s), we can make some positive steps in that direction. One busy family I know keeps Sunday night dinner sacred—no social plans, no school projects, no extra work brought home from the office. Even keeping the family ritual just once a week gives parents the opportunity to point out what is and isn’t healthy at the dinner table. 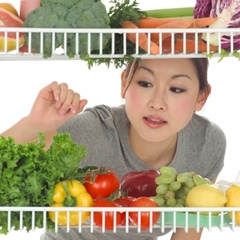 Published by Unknown at 7:14 AM

Email ThisBlogThis!Share to TwitterShare to FacebookShare to Pinterest
Labels: nutrition