No, it's not time for Lent! I'm just calling today's post "Fat Tuesday" because I wanted to pass along information I received after reading an email I received from the "Eat this, Not That!" article in Men's Health Magazine. Yes, I do keep up with men's health as well! Occasionally we all spend time eating out at restaurants, and so this is a warning of what NOT to eat when you go to some of these local eateries.


The Fattiest Foods in America

New rule: The more syllables in a menu item's name, the more fat there's likely to be in the dish. Less than 3 percent of the beef produced in this country earns the USDA's "prime" rating, and that's not a bad thing. Prime beef, as it turns out, is the fattiest beef you can sink your teeth into. If you really want a burger, you're better off heading elsewhere. Not one of Ruby's has fewer than 700 calories. Go with the Plain Grilled Top Sirloin and earn all the beefy protein without the superfluous calories.

For a healthy diet, the USDA recommends you cap your daily saturated fat intake at 20 grams. This meal more than doubles that, and it's only 12 ounces of meat. Sure, ribeye is a notoriously fatty cut, but it's primarily the bath of butter that pushes this steak's fat count to such unhealthy heights. Switch to the Guiltless Grill Classic Sirloin and save an astounding 1,090 calories.

Traditional Mexican food is big on seasoning and light on cheese, but with this quesadilla, Chili's takes a different approach. Trying to appease palates primed for indulgence, the restaurant layers on the fat in four ways: cheese, ranch, bacon, and sour cream. Go with the Margarita Grilled Chicken and you'll cut the overall fat content by more than 80 percent. 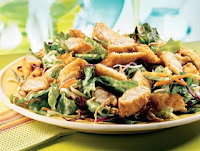 Chicken? Good. Spinach? Good. IHOP’s Chicken and Spinach Salad—downright deplorable. You'll need to i-hop for four hours to burn it off. This salad is exactly what makes restaurant food so questionable and potentially unhealthy. The name makes it sound like a paragon of nutritious eating, yet the numbers reveal it to be just the opposite. The chicken here is actually fried chicken, and the spinach is little more than a small bed for bacon and cheddar cheese. You could snarf down six pancake short stacks and still take in less fat. Save yourself the waistline damage and opt for the Simple & Fit Simply Chicken Sandwich instead.

The American Heart Association recommends eating fish rich in omega-3 fatty acids at least twice a week. By doing so, you lower your risk of such chronic diseases as heart disease and cancer. But if you prepare fish by deep frying it in a tub of bubbling fat—like Applebee's does with this artery-clogging monstrosity—you reverse all those benefits. Opt for Applebee's Garlic Herb Salmon instead. It offers 109 fewer grams of fat, nearly two-thirds fewer calories, and a heap of flavor that will still leave you satiated. 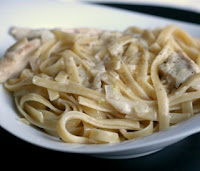 Cheesecake Factory prefers to keep its nutritional stats hidden, but a law in California forced it to reveal saturated fat. Total fat is still a mystery, but this meal breaks through the 100-gram ceiling on saturated fat alone! The culprits here are the oversized portion and the thick, fat-riddled alfredo sauce. The typical restaurant recipe for this sauce relies on some combination of cream, butter, oil, and cheese, and there's no reason to believe that Cheesecake's version strays from the norm. Unfortunately, the chain offers no single pasta dish with fewer than 1,100 calories, so keep yourself safe by sticking to the new Skinnylicious menu.

You can find this article online at:
http://eatthis.menshealth.com/slideshow/fattiest-foods-america
Published by Unknown at 8:59 AM